Lee, MA, January 7, 2021 – Ray Murray Inc. (RMI) is pleased to announce that effective January 7, 2021, Mike Hopsicker has acquired 100% ownership of RMI.  The partnership between Hopsicker and the Murray family started in 2005 when they began working together on a planned transition of ownership.  Prior to RMI, Mike was CEO of Agway Inc., and spent 8 years as the CEO of Agway Energy Products, one of the largest retail marketers of propane and fuel oil in the US.

Over the last several years, the company and its industries certainly faced their share of headwinds and challenges, but ultimately RMI was able to enjoy significant growth and expand its geographic reach through a combination of 4 acquisitions.  It has grown to be one of the largest two-step distributors in both the propane and hearth and grill industries.

“The Murray’s and I are both very excited to have completed the successful transition of ownership!  While it has been in process for 15+ years, it is also bittersweet.  I am sure that the Murray’s have mixed feelings regarding the final sale of the family business that they have lived and loved for so long” says Mike Hopsicker, who has been the majority owner since 2014. “But in the process we formed a very good partnership, and a GREAT friendship!  They are a wonderful family, and I hope they can look back with pride on all that they and their family has accomplished.  I am extremely thankful for all they have done to help me over these past years!”

Ray Murray summarizes the milestone by stating, “This is a momentous occasion for our families, and the entire team at RMI!  We have thoroughly enjoyed working with Mike on the transition.  His family has become our family!”  Jim Murray added “Although it is a little bittersweet, our gratitude to Mike and the entire Ray Murray Inc. team for all that has been accomplished far outweighs those feelings.  We are indeed a family!”

Ray, Jim and John will remain an important part of the RMI management team as advisors to the business, and will continue to assume their current management roles for several years to come.  “The final ownership transfer was the last piece in a long transition, but with the Murray’s continued involvement, the management of the business is not effectively any different than when I assumed the majority shareholder role several years ago.” says Hopsicker.

Ray Murray reflected “Words cannot express what a privilege it has been to be part of this organization since we opened the doors back in 1973.  We will be eternally grateful for this opportunity.”  John Murray, the youngest of the Murray family, summed it up well “I am so proud of what has been accomplished getting to this point.  Mike has assembled an outstanding team, and I am looking forward to continuing to work with him and the entire team to help RMI reach even greater heights!”

Lee, MA, January 11, 2021 – Mike Hopsicker, President & CEO of Ray Murray, Inc. is pleased to announce two new Vice Presidents named to the leadership team at RMI.  Casey Harvey has been promoted to Vice President of Sales, and Scott Porter has assumed the role of Vice President of Operations on RMI.

Casey Harvey started with RMI as a Regional Sales Manager in 2008.  Prior to RMI he spent 10 years with Carroll Independent Fuel Company in Baltimore, MD where he was Manager of Sales and Marketing after quickly rising through the ranks in various positions of increasing responsibility in sales and marketing.  After 4 years of successfully growing our Mid-Atlantic territory, he was promoted to RMI’s Director of Sales in 2013.  As Vice President of Sales, he has the responsibility for leading RMI’s 14 Sales representatives as well as overseeing all of the companies’ sales activities, and providing primary leadership to RMI’s marketing efforts.

Scott Porter has a long career working in operations including leadership roles in product and asset management, purchasing and quality assurance.  He joined RMI in May 2016 to help us optimize our use of the ERP system, assist with acquisitions and improve our operations.  Since that time he has spearheaded many operational improvement projects including helping us assimilate two acquisitions and the reorganization and improvement of our Goldsboro warehouse.  Scott was the Director of Purchasing and Operations with Wes-Garde Components in Hartford, CT immediately prior to joining RMI.  We are looking forward to his continued leadership and stewardship of our warehousing and operational activity as we continue to grow in the future.

Scott has a BS in Geological Science from Bradley University (Peoria, IL) and an MBA from Washington University in St. Louis, MO.  Scott and his wife have two grown daughters and currently live in Simsbury, CT.

Stephen Steller  joined our sales team December 7, 2020 to replace Randy Burns upon his retirement. He will be covering all RMI
product lines in IL, IN, WI and Western MI.

Andrew Vogl  joined our sales team in August and will replacing Bob Rosenbaum upon his retirement. He will be handling propane
equipment sales in most of NY State. He will also be covering hearth and grill products in Central and Western NY. 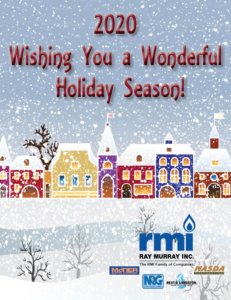 Jeff Hopsicker  appointed to RMI Board of Directors
In November 2019, RMI welcomed Jeff Hopsicker as a member of its Board of Directors. Jeff (Mike’s oldest son) joins the five person board that also includes Mike Hopsicker, as well as Ray, Jim and John Murray. Jeff is a graduate of Hamilton College, and has been employed at Citigroup since June 2016 and currently works in Leveraged Credit Sales in New York City. Jeff had exposure to RMI’s business growing up and spent a couple of summers working on projects related to RMI’s marketing efforts. His experience in the capital markets and at Citigroup, one of the world’s largest companies, will be a great addition to the RMI Board.